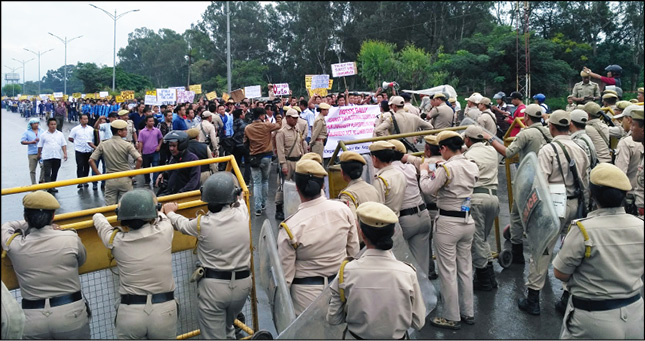 Tribal students carried out a protest rally in the heart of Imphal on Thursday to show their resentment against the raging controversy over the “attempt to reduce” the percentage of seats reserved for admission to post graduate courses in Manipur University.

The rally demanded the authorities of Manipur University (MU) to rescind the October 8 resolution adopted by Academic Council of the institute to implement the Central Educational Institutions (Reservation in Admission) Act, 2006 which provides 7.5 percent seats to Scheduled Tribe (ST) students.

The state government has been feeling the heat of the reservation imbroglio as tribal student bodies intensified the stir. Thursday’s protest rally was organised by the All Tribal Students’ Union Manipur (ATSUM) backed by All Naga Students’ Association Manipur (ANSAM) and Kuki Students’ Union (KSO).

MU has been accused of defying directives of the High Court of Manipur and UGC norms in implementing reservation in the institute installing admission process for post-graduate students.

A large number of police personnel were mobilised in view of the demonstration. The rally started from Adimjati complex, Chingmeirong where hundreds of students gathered before they marched towards the Raj Bhavan.

The police blocked their way near PCTC fuel station and that resulted in a confrontation between the two sides. After a brief standoff, five leaders of the agitating students were later permitted to hand over a memorandum to Governor Dr Najma Heptulla who was out of station. The memorandum was submitted to the Manipur Governor through her secretary at the Raj Bhavan.

The five-member student team was headed by ATSUM president Joseph Hmar and ANSAM president Seth Shatsang who were also taking part in the rally.

In the memorandum, the Governor was informed that the Deans Committee, MU in its meeting held on April 4 took a hasty decision without seeking clarification from UGC to implement the all India reservation norms of 7.5 percent for ST students, 15 percent for SC (Scheduled Castes) and 27 percent for OBC (Other Backward Classes) in admission and recruitment overlooking the order of Manipur High Court and the Central Educational Institutions Act, 2016 as amended in 2012.

The resolution of the committee was condemned by the Manipur University Tribal Students’ Union (MUTSU) backed by ATSUM as it was “reversal” to the existing Parliament Act and a direct attempt to further “discriminate and marginalise” the tribal community by limiting the access to higher education, the memorandum said.

It urged upon Dr Heptulla to look into the matter and highlighted the need for taking up timely corrective measures to resolve the issue. The tribal student bodies demanded implementation of the Central Educational Institutions (Reservation in Admission) Act, 2012 under which 31 percent of seats is provided to ST students.

The news article is republished from Morung Express, October 13, 2016. 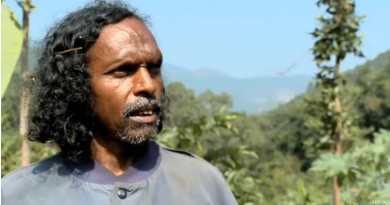